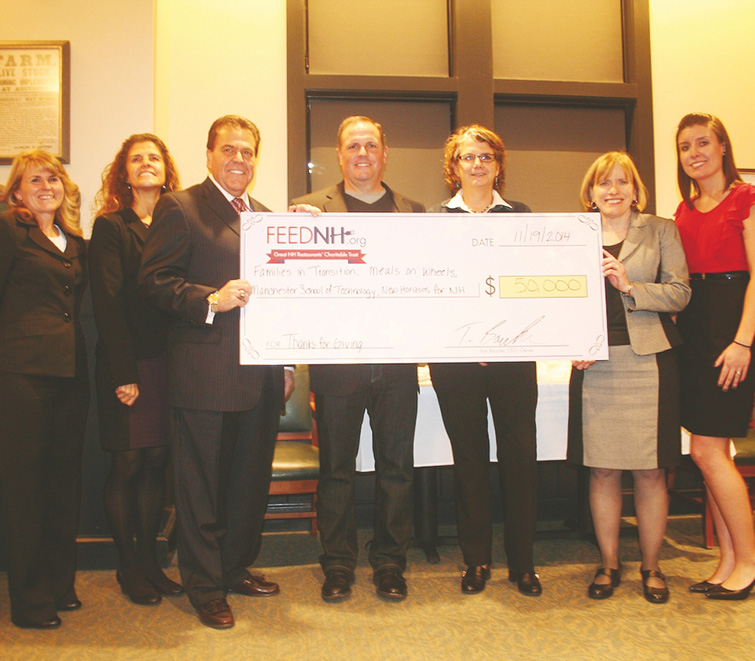 BEDFORD — As nonprofits struggle to meet the needs of the populations they serve during the holiday season, a restaurant group has stepped up to help support the efforts of four organizations.

“We really wanted to keep it tight and help at a very local level, and really have impact,” said Tom Boucher, chief executive officer of Great New Hampshire Restaurants. FEEDNH, the nonprofit arm of Great New Hampshire Restaurants, based in Bedford, recently wrapped up its annual “Thanks for Giving” campaign. Customers at T-Bones, Cactus Jack’s and Copper Door locations in Bedford, Manchester, Derry, Salem, Hudson and Laconia were asked over the past four weeks to make a $5 donation to the cause, and in turn received a $10 gift certificate to any of the restaurant group’s locations.FEEDNH raised over $50,000 during “Thanks for Giving,” Boucher said.

“We’ve done ’Thanks for Giving’ for probably 10 years, and it’s the most we’ve ever raised, by a lot,” Boucher said at the check presentation gathering on Wednesday.

This is the first year Great New Hampshire Restaurants has put on “Thanks for Giving” as a part of FEEDNH, the company’s recently formed nonprofit organization. The name is an acronym for “families,” “education,” “elderly” and “disadvantaged,” which represents the four areas it seeks to support.

The four organizations chosen to benefit from this year’s campaign — Families in Transition, the Manchester School of Technology, New Horizons for New Hampshire, Inc. and St. Joseph Community Services, Inc. Meals on Wheels — each received $12,500.

Boucher said that while the incentive to get a gift certificate might have helped the campaign exceed $50,000 — about double what the annual fundraiser usually gets — he doesn’t believe that was the main reason people supported it so heavily this year.

All of the organizations said they were grateful for FEEDNH’s generosity, especially at this time of year.

“We have very, very tight budgets at our school,” said Karen White, principal at Manchester School of Technology. “This is tremendous, tremendous for us.”

The school offers a culinary arts program, and the check from FEEDNH will benefit students in that program, White said.

“We have students that come into this program that can’t even afford to get a chef’s coat,” she said.

“So a program like this one will be hugely helpful to our ability to meet the need in the community,” she said.

Maureen Beauregard, president of FIT, said her organization felt “blessed and fortunate” to be chosen as a recipient.

“We really look for partnerships in the community, and I’ve been trying to develop a partnership with Tom’s organization for a few years now,” he said.

“To be included in this, the first time they’ve brought in the four charities, and even to be associated with the other three charities — it’s fantastic, not only for the fundraising side of it, but also for raising awareness of who we are and what we do,” Sherman said.